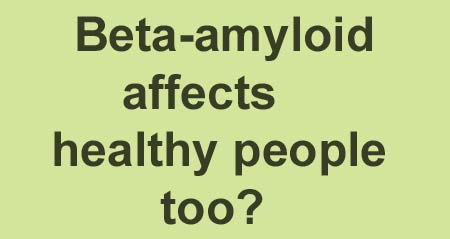 As part of the study, 137 individuals in the age-group 30 to 89 who were highly educated and free from cognitive disabilities, went through brain scans. They were also trialed for the existence of the APOE gene, which is known to elevate the risk for Alzheimer’s.

The scan reports showed that the amounts of beta-amyloid in the brain apparently increased with growing age. Also, about 20% of adults aged 60 and above seemed to have increased proportions of beta-amyloid in their brains. The presence of higher levels of this protein seemingly corresponded to lower memory scores related to reasoning and speed processing abilities.

“In our study, we observed that even in adults with apparently good cognitive health, increasing amounts of beta-amyloid in the brain are related to subtle changes in memory and mental function,” commented study author Denise C. Park, PhD, of the Center for Vital Longevity at the University of Texas at Dallas.

One question that professionals wish to address is whether high levels of beta-amyloid deposits could always be considered as indicators of cognitive impairment. The team also aims to understand if certain adults with higher deposits of beta-amyloid may be able to sustain optimum mental function as they age.

The study is published in the journal, Neurology, the medical journal of the American Academy of Neurology.