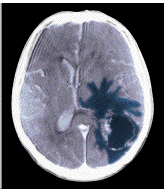 Reportedly, biologists in the United States have identified an alternative diet-based method that apparently, helps reduce the growth of brain tumors considerably.

Tom Seyfield, a Boston biology professor along with other researchers identified a diet called ‘KetoCal’ as the perfect diet to decrease the growth of brain tumors. KetoCal is a commercially available high-fat. Low-carbohydrate diet, which is intended to treat epilepsy in children, reported the online edition of health magazine ‘WebMD’.

The researchers analyzed the treatment’s effect on mice and concluded that that it does not involve administering toxic chemicals, radiation of invasive surgery.

The researcher surgically implanted two different kinds of tumors into the brains of male mice. After which, the mice were divided into three groups.

One group was fed a high-carbohydrated mouse chow, the other one was fed with unlimited portions of KetoCal and the last one was given KetoCal in a restricted quantity.

Malignant brain cancer is one of the most fatal types of cancer in adults, and is infact the second most common cause of cancer deaths in children.

Several existing methods of treating brain cancer have failed to give long-term management as the futilely target tumor cells and harm the health and vitality of normal brain.

Now where the KetoCal diet stands out is that it deprives the brain tumor cells of the sugary molecules on which they depend on for growth and survival.

Thanks to its special composition, the diet does not provide the glucose that the tumor cells generally need. Furthermore the diet also offers normal brain cells with ketones, which is a type of organic compounds they can metabolize efficiently but the tumor cells cannot, the group of researchers maintained.

Fructose-rich beverages correlate with heightened risk of gout in women?