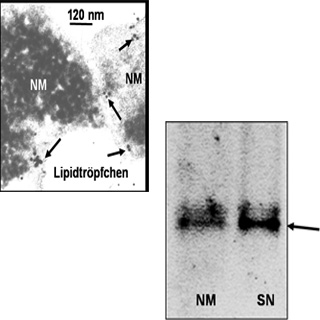 Neurons which produce the neurotransmitter dopamine are known to be the cerebral cells which most commonly die-off in Parkinson’s disease (PD). The cells in the substantia nigra appear to be affected. Supposedly, these cells contain the dark pigment neuromelanin. Also, it is believed that the iron content of these cells increases during the course of Parkinson’s disease. In order to examine this process in greater depth, a team of researchers from the University of Bochum were noted to have worked under the guidance of Prof. Katrin Marcus and in close collaboration with colleagues in Munich and Wurzburg.

Researchers were able to make for the foremost time a significant observation, namely to provide evidence of ferritin within the neuromelanin granules inside the affected brain cells. Ferritin is known to be an iron depot protein which has only been confirmed in the supporting cells of the brain, however not in neurons till today.

Apparently, analysis of the human brain reveals a distinct dark discoloration of the substantia nigra and locus coeruleus within parts of the brainstem. This is due to the bluish to brown-black pigment neuromelanin. Neuromelanin is known to be present only in the human brain and that of a few other mammals including primates, cows, horses, some breeds of sheep.

Research into neuromelanin is mainly interesting because the substantia nigra of patients with PD seems to fade in color during the course of the disease. The pigment is known to be widespread in dopaminergic neurons, which mostly die-off in PD patients. Dopamine appears to be an essential neurotransmitter.

Motor control could perhaps be impaired if dopaminergic cells decay. However, this in turn results in the symptoms typical of Parkinson’s disease. The distinctive characteristics of PD are known to include resting tremor, increasing postural instability and poor coordination of general movements.

The findings of the presently obtained information revealed that the selective necrosis of the dopaminergic neurons in the substantia nigra seems to be accompanied by an accumulation of ferrous ions (Fe3+). Evidently, the homeostasis of the iron content is damaged and this intensifies as the disease progresses.

Elevated quantities of free Fe3+ also known as inter alia seems to result in an increased formation of cell-damaging free radicals which eventually leads to necrosis of the cells. Neuromelanin is believed to be capable of bonding ferrous ions along with other heavy metals. For many decades, it had been unsure whether the cells appear to be protected by the pigment ‘intercepting’ ferrous ions, or whether the accumulation of the iron appears to be in fact responsible for damaging the cells.

The information collected during the past few years seems to indicate that neuromelanin mainly plays a protective role for the neurons.

Thus, during the current research, researchers examined whether there could be an additional mechanism for the accumulation of iron in the substantia nigra over and above the direct binding of the Fe3+ to neuromelanin.

Allegedly, for the foremost time, they were now able to provide evidence of ferritin in the neuromelanin granules. This evidence could be supplied with the help of a combination of diverse techniques. These miscellaneous methods were believed to include one-dimensional SDS gel electrophoresis, targeted mass spectrometry, western blot analysis, as well as immune transmission electron microscopy.

Till today, this important iron depot protein is known to have only been established in glia but not in neurons.

Prof. Katrin Marcus concluded by saying that in the opinion of her research team, ferritin in the neuromelanin granules seems to be a further noteworthy element in the homeostasis of the iron content in the substantia nigra. Also, this primary direct proof of ferritin in neuromelanin granules in dopaminergic neurons appears to be a crucial step towards the development in the understanding of the iron metabolism in the human substantia nigra.

Moreover, ferritin may perhaps provide debates for novel hypotheses concerning the mechanisms of the iron-regulated degeneration of the substantia nigra in Parkinson’s disease.

The findings of the research have been published in the journal, Molecular and Cellular Proteomics.