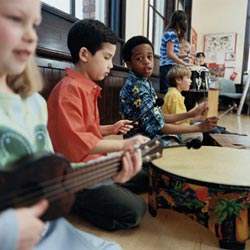 A new Canadian study has revealed that when parents send their little ones to music training classes it benefits their child in more one way. It has been discovered that children who attend music classes have better memories than their nonmusical peers.

The study showed that after one year of musical training, children performed better in a memory test than those who did not take music classes.

“(The research) tells us that if you take music lessons your brain is getting wired up differently than if you don’t take music lessons,” Laurel Trainor, professor of psychology, neuroscience and behavior at McMaster University in Hamilton, Ontario said.

“This is the first study to show that brain responses in young, musically trained and untrained children change differently over the course of a year,” added Trainor who led the study.

Over a period of a year they took four measurements in two groups of children aged between four and six — those taking music lessons and those taking no musical training outside school — and found developmental changes over periods as short as four months.

Trainor said while previous studies have shown that older children given music lessons had greater improvements in IQ scores than children given drama lessons, this is the first study to identify these effects in brain-based measurements in young children.

“On the other hand, it is very interesting that the children taking music lessons improved more over the year on general memory skills that are correlated with nonmusical abilities such as literacy, verbal memory, visio-spatial processing, mathematics and IQ,” continued Trainor.

The study is to be published in the online edition of the journal Brain on Wednesday.