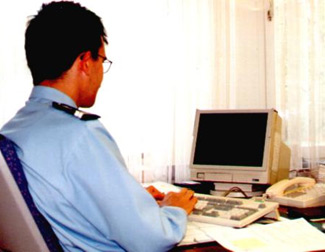 People who work in offices, whose job requires them to be seated at a desk or in front of a computer screen for hours on end, are at a risk from potentially fatal blood clots forming in their legs.

The study on thrombosis was conducted by Prof. Richard Beasley of New Zealand’s privately funded medical research Institute. The study found that 34 per cent of patients admitted with blood clots had been seated at work for long periods of time.

Deep-vein thrombosis (DVT) is a condition in which blood clots form in the deep veins of the legs. The clot can be fatal if part of it breaks off and blocks a blood vessel in the lungs. The condition has been linked to long-haul airline flights and dubbed “economy class syndrome,” because passengers traveling coach often do not have the space or opportunity to stretch enough to reduce the risk of blood clotting.

“There are considerably more people who are seated for long periods at work as part of their normal day than there are traveling,” he said, adding the main groups affected are workers in the information technology industry and in call centers,” said Beasley.

The study covered 62 patients aged under 65 who were admitted to a hospital with blood clots.
Beasley said a surprise finding of the study was that “people are working for so long. We had people not uncommonly working up to 12-14 hours a day and being seated for that time.”

The 34 percent finding is much higher than the 1.4 percent of blood-clot patients who recently traveled on long-haul flights, and the study showed a clear link between travel and work-related thrombosis.

“It’s the same thing occurring in a similar circumstance as travelers’ thrombosis,” he noted.

Some reported being seated on the job for three to four hours at a stretch, “reflecting the very sedentary nature of our work at the moment,” he said.

A second study of seated immobility at work had results “very consistent with what we’ve found” in the first, Beasley said without elaborating.