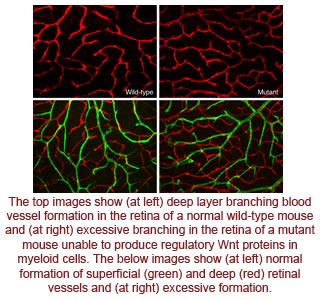 Angiogenesis is a process of blood vessel branching that also seems to result in the formation of malignant tumors. In a research conducted at Cincinnati Children’s hospital, scientists uncovered a new molecular pathway that could possibly subdue blood vessel branching in the growing retina. This investigation has therapeutic value to combat diseases of the retina and cancers affecting varied portions of the body.

According to scientists the branching patterns of the retina are guided by myeloid cells stem cells of the immune system which make use of this molecular pathway. The investigators could also possibly reverse the pathway by helping the growth of branching vessels that seemed to be useful for evolving new methods to repair the harmed tissues.

“We show in the setting of retina that myeloid cells use this pathway to direct vascular traffic. We think modulation of this pathway might become a promising therapeutic option,’’ mentioned Richard Lang, PhD, senior investigator and director of the Visual Systems Group in the Division of Ophthalmology at Cincinnati Children’s Hospital Medical Center.

According to the research, postnatal mice apparently seem to use retinal myeloid cells present in their retinas in the developing stage, to regulate blood vessel branching with the help of Wnt protein signaling network. The Wnt pathway may result in embryonic and early developments of cancer. Formation of a tumor and its progression is seemingly linked to myeloid cells though they are an essential part of the immune system.

Various cell cultures and mouse models were incorporated as a part of the research to determine the working of the myeloid cells. The expression of a certain gene Flt1 was apparently linked to the myeloid cells that utilize the Wnt pathway.

According to scientists, the Wnt-Flt1 response could be a new pathway for the adjustments of VEGF-stimulated angiogenesis. Furthermore, this observation seemed to test the effect it has on retinal diseases which are mainly linked to abnormality in blood vessel growth or tumor formation.