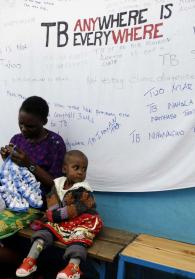 Yesterday, the World Health Organization said that a new and deadly form of tuberculosis has been spreading through South Africa and has also been found in rich nations in Europe as well as Canada and the United States. Africa’s large AIDS population is at special risk from the particularly virulent strain, known as XDR-TB (extremely drug resistant), which had been documented in 35 countries worldwide, 16 of them in this year.

“This is the most urgent thing I have seen in my 15 years of working on tuberculosis,” said Mario Raviglione, director of the STOP TB program at the World Health Organization. He introduced WHO’s TB report, which coincides with the 125th anniversary of the discovery of the microbe that causes TB. “If it keeps spreading, as it has in South Africa, then we are really in trouble,” Raviglione said.

In 2005, nearly 9 million people became infected with tuberculosis and 1.6 million died of it, about the same as the year before, which showed that containment efforts were working, Raviglione said. The epidemic is centered primarily in Asia and in Africa, which accounted for 84 percent of the total.

“The good news is that the global incidence may have peaked,” particularly in China, India, and Indonesia, he said. “The bad news is that although the incidence has declined [there] is resistance to most powerful first-line drugs and a form of TB that is resistant to second-line drugs.”

There are 269 confirmed cases of XDR -TB , first reported in South Africa, with 85 percent of the afflicted expected to die.

In the industrialized nations, XDR-TB increased from 3 percent to 11 percent in 2005, WHO said without giving precise numbers of victims.

A cure is not available. As a first step, diagnostics and improved health systems are deemed necessary to treat HIV, the virus that causes AIDS, and TB simultaneously.