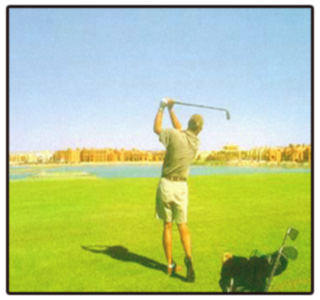 People who like to play golf would now have an added advantage from the game because playing golf would add to 5 years of your lifespan endowing greater health benefits, notes the latest study conducted by the Swedish medical university Karolinska Institute.

The golfers have almost 40 per cent lower risk of death than non-golfers of the similar sex and age. But there was a difference in the effect on health in the golf players according to the social economic status. For instance the health effects were much better in golfers from blue collar background compared to the golf players with professional jobs, suggests the study.

The study even found that there were lowest death rates in players with a low handicap (i.e. the best golfers) and they were also the safest. And players with low handicap had less chances of dying almost up to 47 percent than the non-golfers of the same age.
“Maintaining a low handicap involves playing a lot, so this supports the idea that it is largely the game itself that is good for the health,” says Professor Ahlbom.

Professor Anders Ahlbom, who has led the study with Bahman Farahmand examined 600,000 golfers and said that there are various health benefits in playing this game.

A group of researchers from Karolinska Institute has prepared the data and presented a detailed study of the health benefits and effects of playing golf.

The study has already been published in the Scandinavian Journal of Medicine and Science in Sports, and the researchers have collected information from 300,000 Swedish golfers and have revealed that golf has beneficial health effects.

“A round of golf means being outside for four or five hours, walking at a fast pace for six to seven kilometres, something which is known to be good for the health,” says Professor Anders Ahlbom. “People play golf into old age, and there are also positive social and psychological aspects to the game that can be of help.”

The study has not pointed out other factors except that playing golf has beneficial health effects. The other factor behind the lower death rate in people playing golf is the way some of the golfers inherit a healthy lifestyle.

Although researchers did note that playing only golf is beneficial for the individuals’ health.

Pollution, passive smoke and everyday allergens could be sources of laryngitis