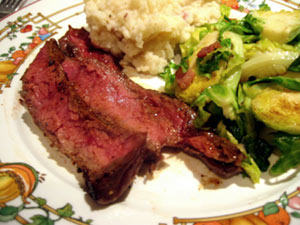 A new research has found that women who eat even small portions of red meat frequently may face the risk of developing breast cancer.

Researchers in the US found that younger women who regularly ate 4.5 oz of red meat a day were doubling their risk of developing breast cancer compared with those who ate it infrequently.

The new study by researchers at Sheffield University found that eating as little as 2 oz of beef, pork or lamb every day can increase the risk of contracting the disease by 56 percent in older, postmenopausal women.

Eating larger amounts of processed meats, such as sausages, bacon, ham and pies, pushed the risk to 64 percent for the same group, the study, which appeared in the latest issue of British Journal of Cancer, found.

At the start of the trial, they were asked to complete a 217-item food questionnaire from which they were divided into three groups – high, medium or low meat eaters.

They were compared with women in the sample who ate no meat. The researchers also took into account smoking, weight, fruit and vegetable intake.

Cade said she was surprised that such a small amount of meat appeared to have a large effect.