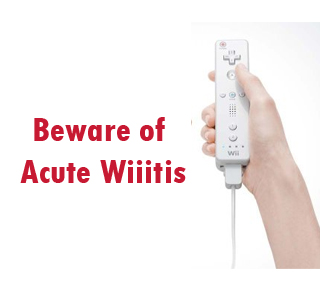 Just wait a minute and read this article before you rush to play the Wii Sports on your Nintendo Wii next-gen console for the umpteenth time.

This advice comes as a piece of medical recommendation issued in a recent article in the Skeletal Radiology journal. The paper mentions the case of a healthy 22-year-old gamer who got a shoulder ache after playing Wii Bowling. Post which, a Magnetic Resonance Imaging (MRI) scan was conducted which revealed that the patient had “diffuse areas of increased intramuscular T2 signal intensity” in several muscles of the upper body, along with some edema.

The doctors diagnosed it as acute Wiiitis, and administered non-steroidal anti-inflammatory drugs along with a lyphedema wrap (a tight bandage) to treat the pain.

Doctors Nett, Collins and Sperling then got busy putting up this unique case into words for publication, pointing the condition to “awkward deceleration forces.” Seemingly, stopping your swing too abruptly subjects your muscles to “significant eccentric loading”.

“[L]ittle resistance is offered by the light 200 g handheld controller to the aggressive maneuvers made by the participant, which may lead to awkward deceleration forces being applied to the upper extremity…. It is likely that, during the deceleration phase of swinging the Wii controller, there is significant eccentric loading on the participant’s muscle groups, causing the ultrastructural damage, as demonstrated in this case.”

So have you ever experienced any discomfort or soreness after playing with the Wii-mote? If yes, then do share your experiences with us.

Pregnant Women should restrict intake of Oily Fish due to High...

Unprotected sex on a rising spree among youth, reports study