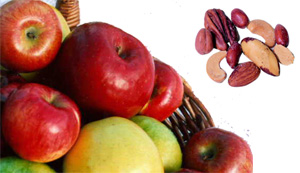 Eating a healthy diet that includes plenty of fruits and nuts could help protect children from respiratory allergies and asthma. This benefit is thought to be linked to the vitamins and antioxidants they contain. Eating oranges, apples, tomatoes and grapes each day was shown to have a protective effect against wheezing and allergic rhinitis, according to a study in the international journal of respiratory medicine Thorax.

Similarly, nuts are rich sources of vitamin E and those who eat them at least thrice a week are less likely to wheeze. Vitamin E is the body’s main defence against cell damage caused by free radicals.

Nuts also contain high levels of magnesium, which was earlier shown to protect against asthma and boost lungpower.

Scientists were curious to know why children in some parts of Britain get asthma while others in places like Crete do not.

Experts from the National Heart and Lung Institute in Britain, the University of Crete, Venezelio General Hospital in Crete and the Centre for Research in Environmental Epidemiology in Barcelona looked at the incidence of asthma symptoms, such as wheezing, and of allergic rhinitis, caused by dust mites or pet allergies.

The researchers assessed the diet and health of almost 700 children living in rural areas of Crete, where such conditions are rare and found those with a diet rich in fruit and vegetables were protected against both conditions.

The research, reported in the online edition of BBC News, found 80 percent of the children ate fresh fruit and over two-thirds of them fresh vegetables at least twice a day.

“The results of this study add to the existing evidence which indicates that a healthy diet can play an important role in the control of asthma symptoms,” Leanne Male, assistant director of research at Asthma UK, said.