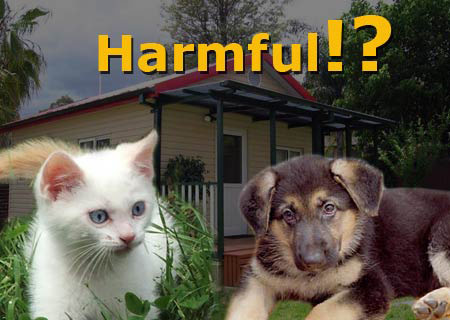 A recent study has found that most cats and dogs are inhaling and eating toxic gases and contaminated materials like fire retardants, mercury, chemicals used in furniture, fabrics and electronics and in stain-proof coatings. There are several possibilities wherein your dog or cat usually get prone to such chemicals and other liquids splashed on the floor.

According to a new study by the Environmental Working Group, a Washington, D.C.-based nonprofit research organization, swarming chemicals are highly toxic for pets. Where some of us are fussing for our infants and toddlers concerning the baby bottles and prescription drugs; our pets although are in danger! According to Bill Walker, vice president for the West Coast office of the group, the high chemical levels to laws that allow companies to use chemicals that have not been proven to be injurious even though they may still have harmful effects. But it’s found from a new study that dangerous chemicals in cats and dogs are mostly through household chemicals. For both, the kids and pets, the exposure is greater and resulting health risks are higher. The article shows how industrial chemicals and toxins used in clothing, food, toys and cosmetics have entered into human blood.

The study that was released by Berkeley-East Bay Humane Society, has found that the pets were contaminated with chemicals including plasticizers, grease-proofing chemicals and fire retardants. There was a blood and urine test done for both the dog and cat respectively. The study of blood and urine samples from 20 dogs and 40 cats showed that the pets were contaminated with 48 of 70 industrial chemicals tested including 43 at levels higher than those typically found in people. Some of the conclusions show that basic everyday items we use, or track into our houses, could be responsible.

The typical worry are the carcinogens, as dogs suffer from a much higher rate of cancer than humans do, including 35 times more skin cancer, 4 times more breast tumors, 8 times more bone cancer, and twice the incidence of leukemia, according to the Texas A&M Veterinary Medical Center in 2008. Cancer is the second leading cause of death in dogs and as much as 20 to 25 percent of dogs die of the disease.

“There’s been an increase in cancer in dogs and cats and hyperthyroidism in cats,” said Gary Richter, a veterinarian at Montclair Veterinary Hospital in Oakland who attended the news conference.

Cats and dogs are more polluted with toxic synthetic industrial chemicals than humans, according to the new study released on April 17 by the EWG, which has earlier found a range of toxic chemicals in newborns. Pets contract these toxic chemicals due to them being so close to the floor, licking the floor, etc. The group is pushing for better regulation and for safer products. The report notes that in America there are 8 times more companion dogs and cats than there are children under five. Seventy percent more homes have dogs or cats than children of any age.