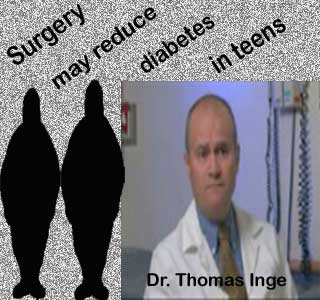 A new study by the Cincinnati Children’s Hospital Medical Center says that evidently diabetes reduces in the Type 2 diabetic teenagers after their gastric bypass surgery.

It’s stated that Type 2 diabetes mellitus is of a major concern in adults. However, an estimated 50 percent of all new pediatric diabetes diagnoses are said to be type 2. It’s assumed that obesity could be one of the causes of development of this disease.

This study was supposedly conducted on around 78 adolescents suffering from type 2 diabetes. Apparently, around 11 of the patient’s underwent gastric bypass surgery, while the rest were evidently a part of a comparison group at Cincinnati Children’s. The second group are said to have received a routine medical management for their diabetes, but they evidently did not receive any kind of surgical treatment.

The study revealed that bariatric surgery, especially Roux-en-Y gastric bypass, could aid the teens to evidently loose a third of their body weight on an average; and also supposedly brought about a decrease in diabetes in all but one teen. An improvement in their over all health like lower blood pressure and cholesterol levels were also reported.

Lead author of the study, Thomas Inge, M.D., Ph.D., Surgical Director, Cincinnati Children’s Surgical Weight Loss Program for Teens, says that usually patients by the time they get discharged from the hospital can get off their diabetes medication. Inge continues, “The results have been quite dramatic and to our knowledge, there are no other anti-diabetic therapies that result in more effective and long-term control than that seen with bariatric surgery.”

Dr. Inge further says, “While the exact molecular mechanism by which the dramatic remission of diabetes occurs is not yet fully understood, we know that surgery results in a dramatic change in the production of gut hormones, and a change particularly in the way sugar is handled by the pancreas.”

Previous studies have supposedly highlighted the effects of bariatric surgeries on the remission of diabetes in adults. However, apparently not much data is accumulated for families contemplating surgical weight loss for teens.

Dr. Inge stated that, irrespective to weight loss and lower type 2 diabetes, gastric bypass surgery patient’s also notice an improvement in their insulin, glucose, blood pressure, cholesterol and triglyceride level. Having said this, it is also stated that bariatric surgery is apparently not risk free. Dr. Inge and colleagues evidently feel that the benefits of this type of treatment outweigh its risks.