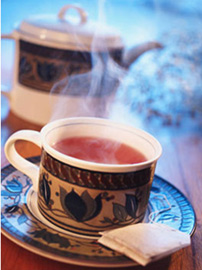 A new study has said that drinking at leas two cups of tea daily can protect you from developing skin cancer. However, scientists are calling for more research on the subject to strengthen the findings.

Tea has disease –fighting properties that appear to protect the body against squamous cell carcinomas and Basal cell carcinomas. These two are the most common forms of skin cancer and are usually caused by too much exposure to the sun’s rays. Researchers have said that these two types of skin cancer grow slowly over a period of months or even years.

Squamous cell carcinomas usually appear on the face and turn into an ulcer-like growth that fails to heal. Basal cell carcinomas normally show up as a painless lump that gradually expands in size. Even though they usually do not spread through the body, they still need to be removed through surgery.

In this new study that was carried out at Dartmouth Medical School in New Hamshire in the US, scientists analyzed over 1400 patients aged between 25 and 74 years with one the two types of tumor.

The scientists compared their diet, drinking habits and lifestyle with a similar group who did not have cancer.

The biggest benefits were seen among long-term tea drinkers, especially those who downed several cups a day for more than 40 years.

According to Judy Rees, who led the research, “The constituents of tea have been investigated for their activity against a variety of diseases and cancers. But the most potent appear to be polyphenols.”

Polyphenols are antioxidants that block the damaging effects in the body of molecules known as free radicals.

However, Judy Rees did stress on the fact that more research was needed to confirm it was the tea and not some other lifestyle factor which protected against skin cancer.