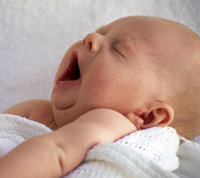 British scientists are currently working on a baby formula which would chemically restructure the metabolic system of children so as to ensure that they never become obese later on in life.

Studies that have been conducted on mice have found that large doses of the appetite-controlling hormone leptin during infancy permanently prevent excess weight gain and also reduce the chances of type 2 diabetes.

Now, researchers at the University of Buckingham say a leptin-enriched baby milk which does exactly the same, should be out in the market in less than 10 years.

Now researchers at the University of Buckingham say a leptin-enriched baby milk which does exactly the same is less than 10 years away, raising a plethora of medical, legal and ethical questions.

Other specialists in the field condemned the search for a medical answer to obesity, saying it is a modern social ill and that people need to address their lifestyles, not look for an artificial quick fix.

Mike Cawthorne, who led the researchers, said: “The supplemented milks are simply adding back something that was originally present: breast milk contains leptin and formula feeds don’t.

“Yes, it raises ethical questions. Obesity is a social problem, but it’s also a health problem which costs us millions of pounds a year and is getting worse. It’s not just a social problem.

Previous experiments in treating obese people with leptin have failed as people continued to overeat. And though some research has linked bottle-fed babies to childhood obesity, none has concluded that breast-fed babies resist obesity throughout life.

A spokesman for the Food Standards Agency said: “If you make a functional food using ingredients that are already on the market, then you wouldn’t have to go through a safety assessment. But if it includes new ingredients then you would, and it depends on the sort of ingredients.”