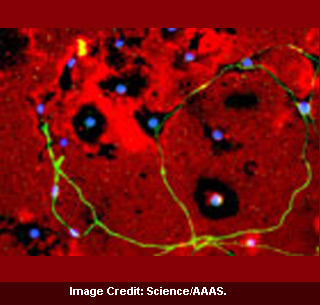 The battle between two competing molecules apparently plays a pivotal role in nerve cells. In a major breakthrough, researchers from the Wellcome Trust Centre for Human Genetics, University of Oxford found that battle between two competing molecules decides whether nerve cells grow and migrate or in the case of scar tissue, are inhibited severely by limiting recoveries from damage to the central nervous system. These two molecules allegedly target exactly the same site on a protein switch that questions how they can produce opposing effects on the growth of nerve cells.

The regeneration of nerve cells within and across scar tissue is presumably inhibited by the molecule chondroitin sulphate proteoglycan (CSPG). This molecule is seemingly produced in large amounts within scar tissue following damage to the nervous system. Scientists assume that this molecule interacts with a protein located on the surface of the nerve cells. This protein appears strongly vital for switching cell movement ‘off.’

“Earlier work suggested that drugs blocking the interaction of CSPG with the protein switch would be beneficial to nerve regeneration. Our work has added an unexpected twist to the story, however: such molecules would also block the positive effect of HSPGs, so the benefits would be minimal, if any.” stated Dr Charlotte Coles, first author of the study and a Wellcome Trust PhD student at the time of the research.

At the time of the investigation, it was pointed out that a closely related family of molecules, the heparan sulphate proteoglycans (HSPGs), may promote nerve growth. They probably do this by acting on the same protein switch to turn ‘on’ cell growth. Both types of molecule are believed to act on the same component of the switch, known as a receptor. It was affirmed that HSPGs can seemingly bind together multiple copies of the receptor, creating clusters of the protein on the surface of the nerve cell.

So other proteins inside the cells responsible for cell movement are supposedly signaled. Without this signal, the nerve cells are possibly unable to move into the damaged tissue. Medications promoting the clustering activity can apparently prove beneficial in nerve regeneration after nervous system injury.