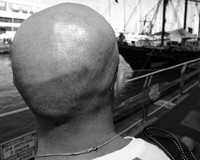 Baldness could very soon be a thing of the past for a finding that was published in Thursday’s issue of Nature offers hope for a baldness remedy for humans.

Researchers at the University of Pennylvania School of Medicine have found that mice with deep skin wounds can grow new hair.

According to senior author George Cotsarelis, MD Associate Professor of Dermatology, “We showed that wound healing triggered an embryonic state in the skin which made its receptive to receiving instructions from ‘wnt’ proteins.”

The ‘wnts’ are a network of proteins implicated in hair-follicle development.

According to previous belief, researchers believed that adult mammal skin could not regenerate hair follicles. In fact, they believed that mammals had essentially no true regenerative qualities. They said that the liver can regenerate large portions, but it is not de novo generation, as some of the original liver has to remain so that it can regenerate.

In this study, researchers found that wound healing in a mouse model created an “embryonic window” of opportunity. Dormant embryonic molecular pathways were awakened, sending stem cells to the area of injury. Unexpectedly, the regenerated hair follicles originated from non-hair-follicle stem cells.

“We’ve found that we can influence wound healing with wnts or other proteins that allow the skin to heal in a way that has less scarring and includes all the normal structures of the skin, such as hair follicles and oil glands, rather than just a scar,” explained Cotsarelis.

Diverticulosis risk may not be linked to nuts, seeds and popcorns