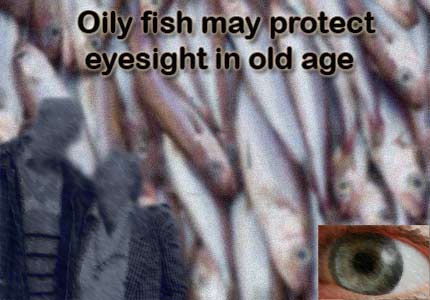 Do you enjoy eating delicious fish? then we have good news for you. Apparently eating oily fish can retain your eyesight when you grow old. Just can’t believe it right? But that’s exactly what a recent study reveals. According to researchers in Europe, eating oily fish at least once a week is a good way to protect your eyesight in old age.

The team found evidence that age-related muscular degeneration (AMD), a major cause of blindness and poor vision in many people can be reduced by eating oily fish once a week. Researchers found that two types of AMD exist, wet and dry. Of the duo, the main cause of vision loss is wet AMD. The research suggests that fish fat could play an important role in preventing blindness due to wet AMD.

Lead researcher Astrid Fletcher of London School of Hygiene & Tropical Medicine commented, “This is the first study in Europeans to show a beneficial association on wet AMD from the consumption of oily fish and is consistent with results from studies in the USA and Australia. Two 3oz servings a week of oily fish, such as salmon, tuna or mackerel, provide about 500 mg of docosahexaenoicacid (DHA) and eicosapentaenoic acid (EPA) per day.”

The research was conducted across seven European countries and coordinated by the London School of Hygiene & Tropical Medicine. The investigation sought to find an association between fish intake and omega 3 fatty acids with wet AMD. An analysis of the dietary habits of participants was obtained. It included information on consumption of fish with the amount and type. A relationship between dietary data with food composition tables revealed information on main omega 3 fatty acids namely docosahexaenoicacid (DHA) and eicosapentaenoic acid (EPA).

The results revealed that in people with a habitual consumption of oily fish at least once a week, there were 50 % less chances of suffering from wet AMD. A strong inverse association between levels of DHA and EPA and wet AMD was obtained. Those who had 25% of DHA and EPA levels (300 mg per day and above) were 70 % less prone to have wet AMD. Also, consumption of non oily white fish had no benefits whatsoever.

However, researchers mentioned that the study does not recommend omega 3 supplements. This is because there was no investigation on whether supplements would have the same benefit as dietary sources.

With additional support from the Macular Disease Society UK and the Thomas Pocklington Trust, the EUREYE study was funded by the European Commission.