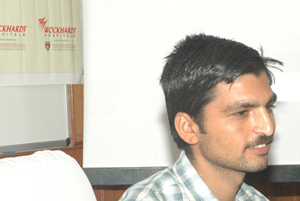 Doctors at Wockhardt Hospital have successfully managed to remove a large cancerous tumor from the patient’s heart in a unique surgical procedure that lasted over five hours.

The doctors removed the tumor that measured 8x10x12 cms along with a large part of both the upper chambers of the heart (the left and right atria). They even reconstructed the patient’s heart.

According to Dr. N. S. Devanand, Consultant Cardiovascular Surgeon, Wockhardt Hospitals, who performed the surgery, “The patient, Prabhu Ram, a 22 year old male complained of breathing difficulties, ran a high fever for about two weeks and had swelling of the face when he came to us at Wockhardt Hospitals.”

“His condition prompted us to put him through a CT guided biopsy of the heart. This enabled us to diagnose that he had a Primitive Neuroectodermal Tumor of the Heart – a rare form of a potentially deadly, cancerous tumor arising from both the upper chambers of the heart, which blocked the blood flow into the chambers of the heart and the right lung,” Devanand continued.

He added that this was an extremely rare case; as such tumors more commonly occur in the brain and chest walls. However, there have been a few similar cases reported in medical literature worldwide.

Dr. Murali Manohar, Consultant Cardiac Surgeon, Wockhardt Hospitals, who operated along with Dr. Devananda said, “We have rebuilt the patient’s atria with his own pericardium, which is the outer covering of the heart, creating passive, bag-like receptacles to channel blood returning from the lungs into the ventricles, the heart’s main pumping chambers. His newly constructed heart functions well and has responded well.”