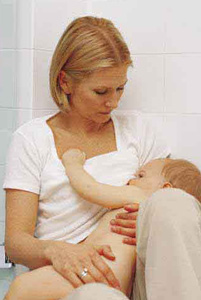 A new study has suggested that mothers who breast feed their babies for longer periods of time are more likely to have a “reduced” risk of developing rheumatoid arthritis (RA).

Previous studies have suggested that hormonal factors play a huge role in the development of rheumatoid arthritis, but this new study has found that breast feeding for 13 months or more was associated with a reduced risk of developing RA compared to women who never breast fed.

The study also found that the longer the breast feeding period, the lower the mother’s risk of developing Rheumatoid Arthritis later on in life.

The study was conducted using data from a community-based health study in Spain between 1991 and 1996, which compared health information from 136 women.
The study said that use of oral contraceptives or hormone replacement therapy did not show a significant effect on the risk of developing RA.

“It further adds to the growing body of evidence in favor of breast feeding and its positive health implications this time demonstrating its protective benefits for the mother,” he added.

Breast-feeding not only helps the child against various diseases but benefits the mother as well. Previous studies have shown that it can lower a mother’s risk of getting cancer.