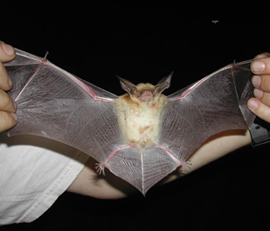 A bat-borne virus recently discovered by Malaysian and Australian scientists is to be renamed, following an angry protest from the state it was named after.

Scientists from the CSIRO and Malaysia’s National Public Health Laboratory recently announced they had discovered a virus believed to be carried by bats that causes serious respiratory illness in humans.

Malaysian health authorities decided to name it “Melaka virus” after it infected a family of four in southern Malacca state in March last year.

State officials objected, saying it was “an insult” and would harm the tourism industry in Malacca which is a popular destination for foreign visitors.

“We will rename the virus if we can, as we do not want to tarnish the good name of the state,” Health Minister Chua Soi Lek said.

“We may name it according to the (actual) place where the patient infected with the virus is from.”

The virus was discovered after a soldier, his wife and two children who developed respiratory illness and fever a week after a bat flew into their home in Bemban village. The entire family has since recovered after receiving medical treatment.

Bats are carriers of a number of viruses including the Nipah virus that killed more than 100 people in Malaysia in 1999.

Weight loss could be achieved by red hot sauce ingredient