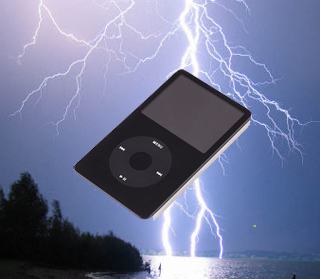 Listening to MP3s in a storm can literally blow your brains out as one man in Vancouver, Canada, found it out the hard way.

Listening to an iPod while jogging, he was struck by lightning. The earphones conducted the electricity through his head, bursting his eardrums and fracturing his jaw.

Most people who are struck by lightning are not hit directly, but get a ‘side flash’ when the electric discharge jumps from the object that was hit.

In 2006, the 37-year-old Vancouver man was out jogging when he received such a side flash from a tree that had been struck.

He was thrown over two metres, as a result of the electricity making his muscles contract.

The violent contraction of his jaw muscles also dislocated and fractured his jaw.

According to Dr. Eric Heffernan of Vancouver General Hospital, who treated the man, the earphones ‘directed the current to and through his head’ and the sudden expansion of gases in his ears due to the hot earphones ruptured them, deafening him.

Two long, thin burn marks extended up his chest and the sides of his face, and there were ‘substantial’ burns inside his ears, he said.

Dr. Heffernan said though a cartilage graft from elsewhere in his body was used to patch up the eardrums, but the patient was still suffering from 50 percent hearing loss, and would require hearing aids.

‘The fractures and burns have healed. However, the iPod was destroyed irreparably. He would require hearing aids,’ New Scientist quoted Dr Heffernan as telling the New England Journal of Medicine.

‘We couldn’t find any reports of similar events [involving headphones] in the medical literature, although there have been press reports of a Colorado man being similarly hit. A woman was also severely injured in 2006 after being struck while talking on a cellphone,’ he added.