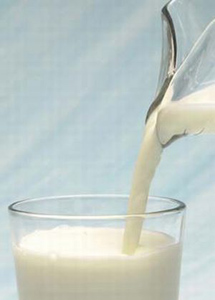 We just reported that drinking milk can help you keep away arthritis. Now, here is another reason to ask people if they “got Milk?” A new research has found that a combination of calcium and vitamin D may offer protection against type 2 diabetes.

The research, conducted at Tufts University, suggests that drinking more milk, a leading source of calcium and vitamin D in the diet, could help lessen the risk of type 2 diabetes by nearly 15 percent.

In the detailed analysis of previously published studies, the researchers found that persistently low levels of vitamin D were linked to as high as 46 percent greater risk of type 2 diabetes.

However, increasing vitamin D only would likely have little effect in healthy adults. As an alternative, the researchers suggested that a combination of vitamin D and calcium, like that found in milk, would have the greatest potential to help prevent diabetes, especially among those at highest risk for the disease.

Examining the intake of milk and milk products exclusively, the researchers found that there was nearly a 15 percent lower risk for type 2 diabetes among individuals with the highest dairy intake (3-5 servings per day) compared to those getting less than 1 ½ servings each day.

The Tufts researchers suggest that calcium and vitamin D may affect the body’s ability to generate or utilize insulin, the hormone the body makes to process sugar that is impaired in those with diabetes and pre-diabetes.

Beside calcium and vitamin D, milk is the primary beverage source of magnesium, which a second meta-analysis found may also decrease the risk of type 2 diabetes (2). The analysis concludes that for every 100 milligram increase in magnesium up to the recommended dietary intake, the risk of developing type 2 diabetes decreased by 15 percent.

Type 2 diabetes and insulin resistance syndrome (or pre-diabetes) influence an astounding 75 million Americans and death rates from diabetes have increased nearly 45 percent over the past 20 years, uplifting the significance of finding new ways to treat and prevent this lethal disease.

The recommended three servings of lowfat or fat-free milk provides 900 mg of calcium, 300 IU of vitamin D and 80 mg of magnesium daily.