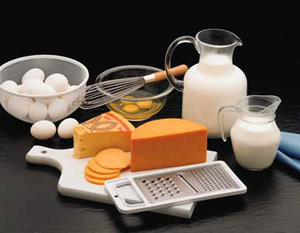 A daily helping of dairy foods can protect against the clustering of abnormal body chemistry known as the metabolic syndrome.

The metabolic syndrome has been linked to an increased risk of diabetes, coronary artery disease and premature death.

The findings are based on a representative sample of 2375 men aged between 45 and 59, all of whom were part of a long term study on health, known as the Caerphilly Prospective Study.

Two or more factors out of high blood glucose, insulin, blood fats, body fat, and blood pressure defined the presence of the metabolic syndrome in the men studied.

The men’s health was tracked over 20 years, during which time data from food questionnaires and weekly food diaries were used to assess how much milk and dairy foods the men consumed.

Around one in seven men (15%) had metabolic syndrome on entry into the study.

These men had almost double the risk of coronary artery heart disease and four times the risk of diabetes of those without the syndrome, the researchers said. They were also almost 50% more likely to die early.

But those who regularly drank milk and ate dairy products, such as yogurt and cheese, were significantly less likely to have the syndrome.