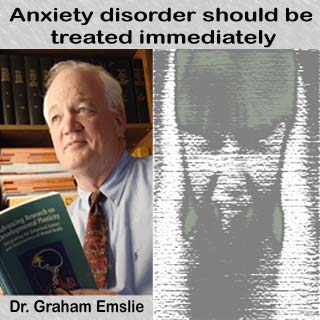 Nationally recognized child psychiatrist from the University of Texas Southwestern Medical Center says that children and adolescents suffering from anxiety disorders should be treated at the earliest.

Dr. Graham Emslie, professor of psychiatry and pediatrics, UT Southwestern continues that in order to avoid educational underachievement, depression and adult substance abuse, anxiety disorder patients should be treated immediately. He is apparently the first psychiatrist to have unveiled that anti-depressants are effective in children and adolescents suffering from depression.

Apparently, around 20 percent of children and adolescents suffer from constant and extreme worry, which could evidently be manifested as a generalized anxiety disorder, social phobia and separation anxiety disorder.

Earlier research has revealed that supposedly an early detection of these symptoms could avoid the patient’s chances of going through educational underachievement, depression, increased rate of anxiety disorders and substance abuse in future.

Dr. Emslie further states that the mental health community realized that adult anxiety disorders have their origin in childhood, apparently with the adaptation of the Diagnostic and Statistical Manual of Mental Disorders 4th edition.

Also the chief of child and adolescent psychiatry at the Children’s Medical Center Dallas, Dr. Emslie says that apparently anxiety disorders in children are usually undetected, mainly because the child is incapable of verbalizing “worry” or “fear”, along with the physical aches they face.

Dr. Emslie hopes that future studies will be conducted in order to evaluate the type of treatment required for particular individual patients. He continues that in children suffering from anxiety disorders, partial treatments would not suffice. Apparently, incomplete treatments or a complete remission could possibly again lead to relapse in these children. Proper treatment is evidently very essential for benefiting a child for his lifetime.

These findings are published in the New England Journal of Medicine issue.