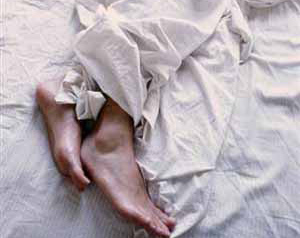 Scientists have linked certain genes to restless legs syndrome, suggesting the twitching condition described as “jimmy legs” in a ‘Seinfeld’ episode is biologically based and not an imaginary disorder.

Research in the New England Journal of Medicine linked a common gene variation to nighttime leg-twitching involving people in Iceland and the United States.

A second study in Nature Genetics identified the same gene variation and two others in Germans and Canadians with restless legs syndrome.

According to Dr. Kari Stefansson, who co-authored the New England Journal study, “This discovery demonstrates the power of genetics not only for uncovering the biological causes of disease, but also for defining diseases such as RLS and establishing them as medical conditions.”

Restless legs syndrome is a neurological condition characterized by an irresistible urge to move the legs. Sufferers say it often hits at night, preventing them from sleeping.

“It feels like something crawling inside your legs, biting on you,” said Betty Shaw, a 68-year-old florist in Covington, Georgia, who was diagnosed with it.