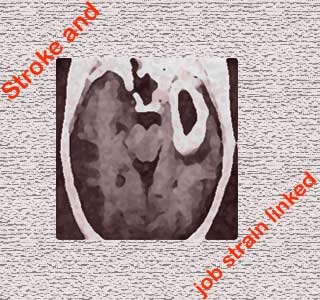 A new study has revealed that Japanese men in highly-stressful job, are more vulnerable to stroke, in comparison with the ones in a lesser stressful job.

It’s stated that stroke can be caused due to additional stress. Various job stress models have clearly outlined the increasing risk of stroke caused by occupational factors, and have even suggested ways to overcome them.

This study was conducted by Akizumi Tsutsumi, MD, University of Occupational and Environmental Health, Fukuoka, Japan; and his colleagues. The study authors say, “The job demand–control model is the most often used occupational stress model. It posits that workers who face high psychological demands in their occupation and have little control over their work (i.e., those who have job strain) are at a greater risk of becoming ill than are workers with low psychological demands and a high degree of control in their occupation (i.e., those with low-strain occupations).”

Around 6,553 Japanese workers were studied. They all had to undergo a series of questionnaires and physical examinations. These subjects were followed-up for an average period of 11 years. It’s stated that in this time zone, around 147 strokes took place.

In the men subjects, after the consideration of the various factors stated above, the authors suggest that the link between job strain and stroke may have waned slightly. They suggest other factors like obesity, high blood pressure, abnormal cholesterol levels, physical activity, poor adaptation to stress and inflammatory conditions among others coupled with job strain could lead to stroke.

Their findings are published in the Archives of Internal Medicine, one of the JAMA/Archives journals.