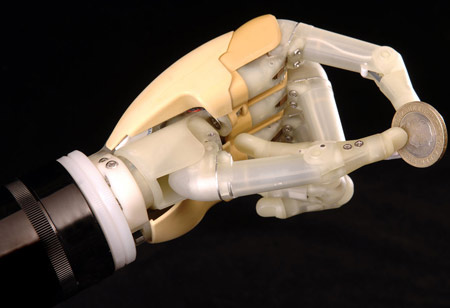 Scottish company has unveiled a revolutionary robotic hand that could soon be available on the National Health Service (NHS). The i-LIMB, built by Touch Bionics in Scotland’s Silicon Glen, has a motor built into each digit and is controlled by nerve impulses from the wearer.

The device is already being used by patents, who have reported encouraging results.

“Every day that I have the hand it surprises me,” said US Army sergeant (retired) Juan Arredondo, who lost his hand in Iraq in 2004.

“Now I can pick up a Styrofoam cup without crushing it. With my other myoelectric hand, I had to concentrate on how much pressure I was putting on the cup. The i-LIMB does things naturally. I can just grab the cup like a regular person,” he added.

The robotic hand uses sensors attached to the patient’s arm and monitors nerve impulses and muscular activity to determine the intentions of the user. The entire device can also be encased in a realistically flesh coloured cover.

“Cosmesis is a hugely important area in prosthetics, both for appearance and for durability,” said Touch Bionics chief executive Stuart Mead.

“Some patients, especially soldiers, love the more robotic look of the i-LIMB Skin, but others like their device to blend anatomically with the rest of their body, and prefer to have a life-like covering for the i-LIMB Hand and ProDigits,” Mead said.

The device will be officially unveiled at the 12th World Congress of the International Society for Prosthetics and Orthotics in Vancouver on 29 July.

Touch Bionics hopes that the devices could be used by the NHS within five years.