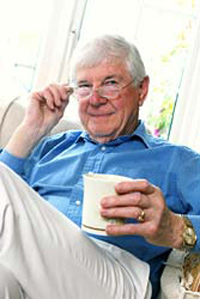 If you want to live a longer life, then eating a proper diet together with exercise and weight control will help you achieve and reap the benefits of longevity, says a new research.

Researchers from Howard Hughes Medical Institute have found that these three factors increase longevity by reducing signaling through a specific pathway in the brain.

Other researchers have already shown that reducing the activity of the pathway in roundworms and fruitflies extends lifespan.

Because reducing insulin-like signaling in the neurons of roundworms and fruitflies extends their lifespan, the researchers decided to examine what would happen when they knocked out one or both copies of the Irs2 gene only in the brains of mice.

Mice lacking one copy of the Irs2 gene in brain cells also showed an 18 percent longer lifespan, and the near complete deletion of brain Irs2 had a similar effect.

Lead author Morris F. White said that the finding had come as a bit of a shock for the researchers.

‘The idea that insulin reduces lifespan is difficult to reconcile with decades of clinical practice and scientific investigation to treat diabetes,’ he said.

‘In fact, based on our work on one of the insulin receptor substrates, Irs2, in liver and pancreatic beta cells, we thought more Irs2 would be good for you.

‘It reduces the amount of insulin needed in the body to control blood glucose, and it promotes growth, survival and insulin secretion from pancreatic beta cells,’ he added.

The study was co-authored by Akiko Taguchi and Lynn Wartschow in White’s laboratory in the Division of Endocrinology at Children’s Hospital Boston and Harvard Medical School.

White speculated that the insulin-like signaling pathway in the brain might promote age-related brain diseases.

‘We are beginning to appreciate that obesity, insulin resistance, and high blood insulin levels are connected to Alzheimer’s disease, Huntington’s disease, and dementias in general,’ he said.

‘It might be that, in people who are genetically predisposed to these diseases, too much insulin over-activates Irs2 in the brain and accelerates disease progression. Thus, insulin resistance and higher insulin levels might be the environmental influences that promote these diseases,’ he said.