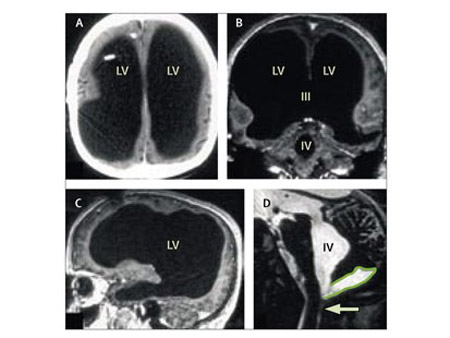 French doctors are puzzled over the case of a 44-year old civil servant who led quite a normal life, but with an extraordinarily tiny brain.

In spite of this condition, the man managed to live a normal life. This condition was caused by a fluid buildup in his skull, reported French researchers.

Scans of the man’s brain showed that a huge fluid-filled chamber called a ventricle took up most of the room in his skull, leaving little more than a thin sheet of actual brain tissue.

According to Dr.Lionel Feuillet and colleagues at Marseille’s Universite de la Mediterranee, “He was a married father of two children and worked as a civil servant.”

He was admitted into the hospital soon after he experienced mild weakness in his left leg.

Scans by computed tomography as well as magnetic resonance imaging (MRI) showed that the man’s cerebral cavities had massively expanded.

“The brain itself, meaning the grey and white matter, was completely crushed against the sides of the skull. The images were most unusual, the brain was virtually absent,” said Feuillet.

The patient’s medical history showed that at the age of six months, he suffered hydrocephalus, which is commonly referred to as water in/on the brain. He thus needed an operation to drain this dangerous build-up of spinal fluid.

Interestingly, neuropsychological testing had revealed that the man had an IQ of 75, with a verbal IQ of 84 and performance IQ of 70. Majority of people in society have a minimum IQ of 85.

Feuillet added, “Despite this condition, the man has been able to lead a life that can be considered normal. Even if he has a slight intellectual handicap, this has not hampered his development or building social networks.”