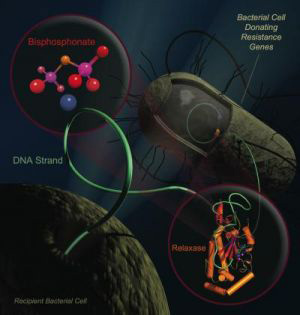 Researchers at the University of North Carolina have now discovered a technique to kill bacteria, to help stop the spread of drug-resistant microbes.

According to the researchers, the key their discovery is a weakness in an enzyme that enables “fertile” bacteria to swap genes for drug resistance. These drugs which are called bisphosphonates and are widely prescribed for bone loss, block this enzyme, preventing bacteria from spreading antibiotic resistance genes.

According to senior study author Dr. Matt Redinbo, Professor of Chemistry, Biochemistry and Biophysics at UNC-Chapel Hill, “Our discoveries may lead to the ability to selectively kill antibiotic-resistant bacteria in patients, and to halt the spread of resistance in clinical settings.”

In the last decade or so, almost every type of bacteria has become resistant to antibiotic treatment. Thus these bugs cause deadly infections that are difficult to treat and expensive to cure, says an article that was published online in the Proceedings of the National Academy of Science.

When a person takes an antibiotic, any bug having a protective mutation against the drug survives. These drug-resistant microbes quickly accumulate useful mutations, and share them with other bacteria through conjugation.

The researchers analyzed the enzyme relaxase that plays a crucial role in conjugation. It starts and stops the movement of DNA between bacteria.

It was found that bisphosphonates could block the spot where the enzyme handled DNA. The researchers say that the drugs steal the DNA binding site, preventing relaxase from handling DNA.

Although the researchers are still unsure as to how biophosphonates destroy bacteria, they believe that the drugs have the potential to wipe out any E. coli carrying relaxase.

“That it killed bacteria was a surprise,” Dr. Redinbo, adding that by targeting these bacteria, the drugs act like birth control and prevent antibiotic resistance from spreading.

The researcher, however, warns that the results only apply to E. coli, and that further testing will reveal whether bisphosphonates also attack similar species like Acinetobacter baumannii (hospital-acquired pneumonia), Staphylococcus aureus (staph infections), and Burkholderia (lung infections).

“We hope this discovery will help existing antibiotics or offer a new treatment for antibiotic-resistant bacteria,” he said.

Dr. Redinbo said that the drugs might be most effective at sites where clinicians can best control dosage, such as skin and the gastrointestinal tract.