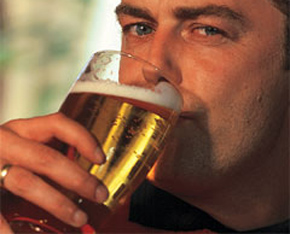 Researchers in Britain say the more the more a person drinks alcohol, the greater the risk of developing colon cancer.

A study partly funded by Cancer Research UK concluded that drinking a large glass of wine or a pint of beer each day increases the risk of getting colon cancer by 10 percent. People who drink two pints of beer a day or two large glasses of wine have an increased risk of 25 percent, the study found.

“The research shows quite clearly that the more alcohol you drink the greater your risk of bowel cancer,” said Tim Key, Cancer Research UK epidemiologist and director of the cancer epidemiology unit in Oxford.

The study, published online in the International Journal of Cancer, questioned 480,000 people in 10 European countries about their drinking habits.

All participants were followed up for a period of six years during which time 1,833 people developed colon cancer.