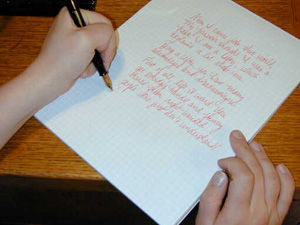 A new study has found that people who are left-handed are at an increased risk of developing schizophrenia. A group of international scientists, led by a team at Oxford University, have identified that the gene LRRTM1 increases the chances of being left-handed.

They have also found that the same gene may slightly increase the risk of developing schizophrenia, a mental illness characterized by impairments in the perception or expression of reality, most commonly manifesting as auditory hallucinations, paranoid or bizarre delusions or disorganized speech and thinking in the context of significant social or occupational dysfunction.

Schizophrenia affects around one in every 100 people.

Although they know little about LRRTM1, the researchers suspect that it works by modifying the development of asymmetry in the human brain.

In humans, the left side of the brain usually controls speech and language, and the right side controls emotion. In left-handers, however, this pattern is often reversed.

However, study leader Dr. Clyde Francks of the Wellcome Trust Centre for Human Genetics, said that left-handed people should not be concerned that they will develop the mental disorder.

‘People really should not be concerned by this result. There are many factors which make individuals more likely to develop schizophrenia and the vast majority of left-handers will never develop a problem. We don’t yet know the precise role of this gene,’ the Telegraph quoted him, as saying.

‘We hope this study’s findings will help us to understand the development of asymmetry in the brain.

‘Asymmetry is a fundamental feature of the human brain that is disrupted in many psychiatric conditions,’ he added.