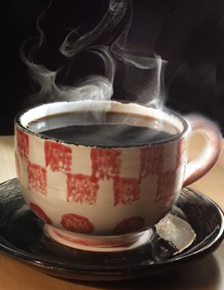 Now, here’s one more reason to drink up on those delightful cups of coffee. A new study has suggested that a combination of coffee and exercise could help guard against the dangerous effects of too much sun, indicating a mehtod of warding off skin cancer as well.

Separately, both caffeine and exercise help to prevent skin cancer, animal tests have shown. But together they work “synergistically” to produce a much more powerful effect, say scientists.

The coffee-workout recipe appears to kill off pre-cancerous skin cells damaged by ultraviolet rays from the sun. If they are allowed to survive, these cells can go on to produce malignant skin cancers.

US scientists at the State University of New Jersey in New Brunswick exposed different groups of hairless mice to lamps that generated ultraviolet-B (UVB) radiation.

One group drank amounts of caffeinated water which were the equivalent in human terms of one or two cups of coffee a day. Another group was allowed to exercise on a running wheel, while a third group both drank caffeinated water and ran. A fourth comparison “control” group did not run and was not given any caffeine.

The scientists carried out tests looking for evidence of programmed cell death, or apoptosis, the process by which DNA-damaged cells commit suicide and avoid cancer. Compared with the control animals, mice exposed to caffeine but not able to exercise showed a 95% increase in UVB-induced apoptosis.

A 120% increase in programmed cell death was seen in mice which took exercise but were not given caffeine. However, combining caffeine and exercise produced an almost four-fold increase in UVB-induced apoptosis.

Dr. Allan Conney, director of the Cullman Laboratory at Rutgers and one of the study authors, said: “If apoptosis takes place in a sun-damaged cell, its progress toward cancer will be aborted.

“The differences between the groups in the formation of UVB-induced apoptotic cells – those cells derailed from the track leading to skin cancer – were quite dramatic. The most dramatic and obvious difference between the groups came from the caffeine-drinking runners, a difference that can likely be attributed to some kind of synergy.”

The researchers, who reported their findings in the journal Proceedings of the National Academy of Sciences, suggested several biochemical mechanisms that might be responsible for the effect. But they admitted that the synergistic interplay between caffeine and exercise was a mystery.