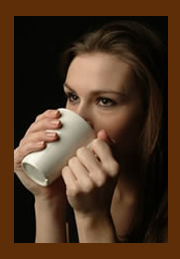 French researchers have said that drinking more than three cups of coffee a day could help to protect older women against age-related memory decline, said, giving women more reason to love the world’s most popular stimulant. However, they said that men did not enjoy the same benefit.

“The more coffee one drank, the better the effects seemed to be on (women’s) memory functioning in particular,” said Karen Ritchie at the French National Institute of Medical Research, whose work appears in the journal Neurology.

The researchers followed more than 7,000 men and women in three French cities, checking their health and mental function and asking them about their current and past eating and drinking habits, their friends, and their daily activities.

They used this information to sort out the specific role caffeine played in these women’s lives.

They found that women who drank more than three cups of coffee per day, or its caffeine equivalent in tea, retained more of their verbal and — to a lesser extent — visual memories over four years.

The effect also depended on age, with women over 80 reaping more benefits from these beverages than those who were 10 to 15 years younger, Ritchie’s team wrote. It was unclear whether current or former coffee consumption made the difference.

Some studies in mice have suggested that caffeine might block the buildup of proteins that lead to mental decline.

However, Richie is not sure why only women benefited in her study.

“Our best guess is that women don’t metabolize coffee in the same way as men,” Ritchie said.