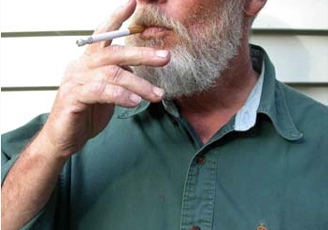 It’s a well known fact that smoking destroys one’s health. Now a new study only reinstates this by saying that smoking may make men go bald. This study states that smoking might just be the cause of age-related hair loss among men.

According to Lin-Hui, M.D., M.Sc., of the Far Eastern Memorial Hospital and Tony Hsui-His Chen, D.D.S, Ph.D., of National Taiwan University, Taipei, the risk for the condition is largely genetic, however some environmental factors may also play a role.

“Androgenetic alopecia, a hereditary androgen-dependent disorder, is characterized by progressive thinning of the scalp hair defined by various patterns. It is the most common type of hair loss in men,” the authors wrote as background information in the article.

The researchers had surveyed 740 Taiwanese men age 40 to 91 (average age 65) in 2005. Information was gathered from the men regarding their smoking habits at a face-to-face interview.

The men were also asked about other risk factors for their hair loss and if they were suffering from alopecia, and if so, at what age they began losing their hair.

Their degree of hair loss was then assesses using clinical classifications. Also, their height and weight were measured and blood samples were taken for an analysis.

The study found that Asian men increased their risk of hair loss as they became older. However, they still had lower risk than the average white man.

“After controlling for age and family history, statistically significant positive associations were noted between moderate or severe androgenetic and smoking status, current cigarette smoking of 20 cigarettes or more per day and smoking intensity,” write the authors.

The study also noted that the relationship between the two could be caused by a number of means. Smoking may destroy hair follicles, damage the papilla that circulate blood and hormones to stimulate hair growth or increase production of the hormone estrogen, which may counter the effects of androgen.