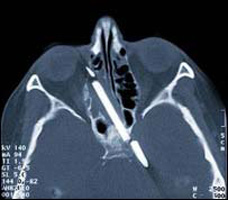 A woman who had a pencil lodged in her head for 55 years after a childhood accident has finally had most of it removed. Her doctor said that this should end her chronic headaches and nosebleeds.

Margaret Wegner was 4 when she fell while carrying the 3.15-inch pencil, which went through her cheek and into her brain.

“It bored right through the skin and disappeared into my head. It hurt like crazy.” Wegner, now 59, said.

At the time, the technology did not exist to safely remove the pencil, so Wegner had to live with it – and the ensuing chronic headaches and nosebleeds- for the next 5 decades.

But on Friday, Dr. Hans Behrbohm, an ear, nose and throat specialist at Berlin’s Park-Klinik Weissensee, was able to identify the exact location of the pencil so that he could determine the risks of removing it, and then took most of it out.

The operation was difficult because of the way the pencil had shifted as Wegner grew, Behrbohm said .

“This was something unique because the trauma was so old,” said Behrbohm, who has also done brain surgery to remove bullets from shooting victims and glass from people involved in car accidents.

Although a piece of a pencil about four-fifths of an inch long could not be removed, Behrbohm said it does not pose a danger.

And now Wegner, the wife of German boxing coach Ulli Wegner, will no longer have the headaches and nosebleeds, and her sense of smell should return soon, Behrbohm said.