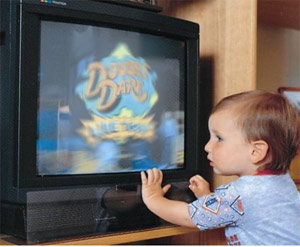 A new study has revealed that DVDs and videos which are devised to teach babies to talk actually impair their word power.

DVDs and videos like Baby Einstein and Brainy Baby, which are priced around 18 pounds, are becoming increasingly popular

The study by the University of Washington and Seattle Children’s Hospital Research Institute found that babies who viewed these videos actually understood a fewer words than those who did not.

“There is no clear evidence of a benefit coming from baby DVDs and videos and here is some suggestion of harm,” said Frederick Zimmerman, an associate professor of health services at the University of Washington, as saying.

“The more a child watches baby DVDs and videos the bigger the effect. The amount of viewing does matter. The best policy is safety first. Parents should limit their exposure as much as possible,’ he added.

For the study, DVD and video viewing were classified into four categories that included educational programmes like Sesame Street and non-educational shows and adult TV shows – The Simpsons, Oprah, and sports programmes.

However, no changes were found in any of the categories, except the DVD and video viewing class.

It was found that for each hour per day devoted to watching baby DVDs and videos, that infants aged eight to 16 months comprehended almost six to eight fewer words in an average than those who did not view their video.

“The results surprised us but they make sense. There are only a fixed amount of hours that young babies are awake and alert,” researcher Andrew Meltzoff said.

“If alert time is spent in front of DVDs and TV instead of with people speaking “the babies are not getting the same linguistic experience. Parents are the baby’s first and best teachers.”

“Watching attention-getting DVDs and TV may not be an even swap for human interaction at this very young age.”