Earlier studies and researchers had uncovered two important age-related pathways. Now, a latest study has administered a link between these two pathways, in aging mice. This discovery has been made by the Stanford University School of Medicine researchers. 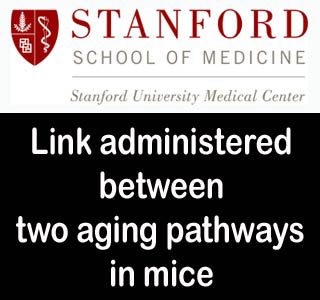 These investigators state that age related skin disintegration may not be in reality be caused by tired cells; on the contrary it may rather be an active, intentional act.

Chang says that, “There is a genetic process that has to be on, and enforced, in order for aging to happen. It’s possible that those rare individuals who live beyond 100 years have a less-efficient version of this master pathway, just as children with progeria — a genetic aging disease — may have components of this pathway that are more active.”

The investigators evaluated two age-related pathways that were apparently separate. The first pathway included the SIRT6 molecule; and second pathway included the NF-kappa B (NF-kB). The SIRT6 belongs to the sirtuin protein genre, while the NF-kB controls the gene expression of various genes, inclusive of the age-related genes. It’s stated that curbing the NF-kB gene expression in the mice skin cells, apparently influences the older cells to behave like the younger cells.

Chua says that, “Sirtuin family members have been implicated in aging and age-related diseases, but very little was known about how SIRT6 worked on a molecular level until recently. Our new study reveals that SIRT6, in addition to its role in genomic stability and telomere protection, also regulates gene expression.”

Chua also says that, “Mice lacking SIRT6 seem to hit some kind of a wall at around four weeks of age, when their blood sugar drops to a level barely compatible with life. Reducing NF-kB activity somehow allows the mice to get over this critical period and to live much longer. These mice provide a great new tool to study the effect of SIRT6-deficiency in much older animals than was possible before.”

Chang says SIRT6 has a very crucial role to play by curbing the NF-kB, which in turn prohibits the aging genes. These investigators are apparently very excited about their discovery of the biochemical connection between SIRT6 and NF-kB pathways.

They hope to soon unveil how NF-kB, in an organism’s life span, knows when and to what extend to start the age disintegration process. They also hope to soon uncover the part played by the SIRT6 molecule. They also wish to soon provide answers as to what regulates these two linked pathways.

Their findings are published in the Cell issue.