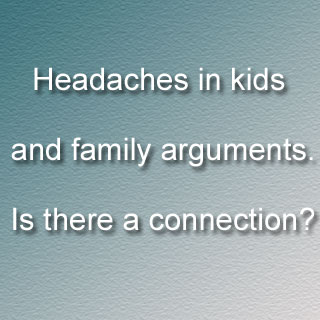 According to a latest study, family quarrels and lack of free time may perhaps promote headaches in children. This study was put forth by Jennifer Gassmann along with her team.

This study was believed to be a part of a large-scale study entitled ‘Children, Adolescents, and Headache’. Supposedly, this major study gathered data in four annual ‘waves’ from the year 2003 to 2006.

Out of a massive amount of variables examined in the larger study, the authors decided to look at the ones which concerned the children’s family as well as leisure time. It was estimated that nearly 30% of all children across the globe complained of headache symptoms which arose at least once every week.

The findings revealed that boys who underwent more than one family quarrel per week seemed to have approximately 1.8 times higher risk of developing headaches. In addition, the amount of free time available to them appears to have been even more significant. For instance, boys who only at times had time for themselves could perhaps have 2.1 times higher risk of developing headaches.

Furthermore, parents’ behavior also played a significant role when their child was noted to have complained of headache. It was observed that either positive or negative support from the parents directs the child that he or she could achieve certain advantages from headache symptoms.

Supposedly, the parents’ responses for the most part had a strong effect on the occurrence of symptoms in girls. For example, strengthening parental responses seems to have raised their likelihood of recurrent headaches by about 25%.

The findings further reported that sexes also appear to have differed with respect to the frequency of headache. Apparently, girls were twice likely to show symptoms of headache at least once a week as compared to boys. However, children’s age, seemed to have a negligible effect on the headache symptoms.

The study findings have been published in the online journal of the Deutsches Aerzteblatt International.