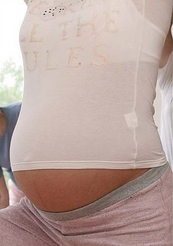 Today, Japanese researchers have said that they have managed to successfully remove, freeze and put back the ovaries of monkeys. They hope that this process would aid in raising hopes for women treated for cancer to be able to have a natural pregnancy.

The researchers adapted a freezing method which the Japanese use to preserve tuna. They tool out both ovaries from five monkeys and froze them for up to three weeks before re-inserting them.

According to Tadashi Sankai, chief researcher at the National Institute of Biomedical Innovation’s primate laboratory, they were now also studying freezing other organs such as the heart and liver, as well as the skin.

The researchers confirmed the returned ovaries in two of the monkeys were producing estrogen, the hormone needed to grow eggs in the female body.

If adapted to humans, the new method would spare the organ from possible damage during chemotherapy or other cancer treatment.

“A big benefit is that they would be able to become pregnant naturally,” Sankai told AFP.

Currently, the options for female cancer patients who want to have a child in the future include freezing their eggs for external fertilisation.

The research is due to be presented to an academic conference in Japan next week.

Sankai said researchers will study if the monkeys in the experiment produce healthy eggs.

“We are planning to examine if eggs will grow properly,” he said, adding researchers would test the eggs by taking them out for in vitro fertilisation.

Sankai is engaging in the study jointly with Koichi Kyono, the head of a Japanese infertility clinic, and other researchers.

It is difficult to freeze a substance containing a lot of water, but the team applied a freezing method used in far-seas fishing to keep tuna, which the Japanese eat raw as sashimi after thawing.

After freezing the ovaries, the researchers kept them in liquid nitrogen at minus 196 degrees Celsius (minus 321 degrees Fahrenheit) for two to three weeks.