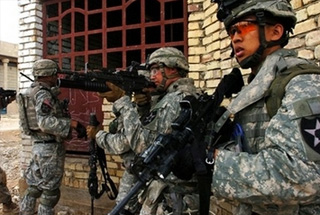 An unusual study by doctors treating blast victims at a field hospital in Iraq has found that ruptured eardrums may help reveal which troops are at risk of hidden brain injury.

The finding is important because many such brain injuries have been missed in the past, especially when more severe or obvious wounds demanded attention.

Researchers report their observation in a letter in Thursday’s issue of the New England Journal of Medicine.

Diagnosing brain injury, especially mild damage, is based largely on subjective symptoms like irritability and forgetfulness. Imaging tests like CAT scans do not help, and neurological function tests are not very useful without baseline information.

“It’s very early in the game of understanding how to evaluate this carefully,” and better ways are badly needed, said Jordan Grafman, a brain injury expert at the National Institute of Neurological Disorders and Stroke. Grafman had no role in the study.

Researchers led by Air Force Lt. Col. Dr. Michael Xydakis checked all troops brought for treatment from roadside bombs and other explosions to the Air Force Theater Hospital in Balad, Iraq, during the last three months of 2005.

The study focused on the 210 surviving U.S. troops who were evaluated for eardrum rupture and loss of consciousness. Of those, 35 percent had ruptures and 36 percent had lost consciousness; the two were closely linked.

Those with ruptured eardrums had a nearly threefold greater risk of concussive brain injury.

The eardrum is only half a millimeter thick — thinner than a contact lens — and ruptures easily, Xydakis said. It is only half an inch from the brain, so “whatever hits the eardrum is going to hit the brain,” such as the pressurized shock wave that follows an explosion, he explained.

Eardrum ruptures usually heal by themselves but occasionally need to be reattached. Concussive brain injuries have a variety of treatments, depending on severity and symptoms. Early detection is thought to improve the chances of avoiding permanent damage.

More research is needed to prove that eardrum rupture is a good marker for possible brain injury; Xydakis hopes that it will lead to more of these injuries being detected.

“We are the first to show this link,” with a study done amid bombs and bullets flying in Iraq, he said. “It’s a very challenging place to do this type of research.”