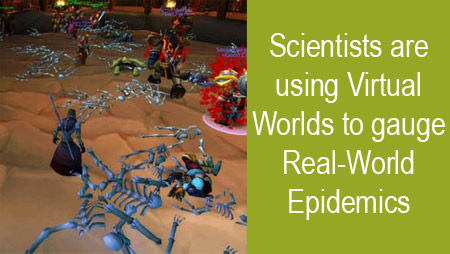 In the World of Warcraft, a popular online game, a ‘fantasy’ plague accidentally spread rapidly within online world, killing off thousands of players. As serious as that may sound, it really wasn’t something to be worried about.

Now, scientists are using disease epidemics that break out in such virtual worlds, to gauge real-world pandemics. A study has also been released on this subject.

One of the authors of the study Nina Fufferman of Rutgers University in New Jersey said that virtual playgrounds like WoW could soon become testing grounds for the all-too-real battle against deadly diseases such as bird flu, malaria or even some as yet unknown killer virus.

“As technology and biology become more heavily integrated in daily life, this small step towards the interaction of virtual viruses and humans could become highly significant,” Fefferman added.

Till date, epidemiologists relied heavily on mathematical simulations to forecast the spread of contagious diseases across large populations.

But crunching numbers has limitations, says Fufferman. “There’s no way to model how people will behave in a public crisis,” she says.

However, there are always skeptics who have suggested that gamers are more willing to take risks online than in the flesh. Even Fefferman acknowledges that there is a difference in the online and real-world behaviors of players.

But in WoW, it was also noticed that most players had invested a lot of their time and energy into strengthening their avatars and forming alliances. Based on this, psychologists say that for many people, their virtual creations have become alter egos.

“We don’t mean to suggest that people’s reactions in this game would exactly mirror their reactions in real life,” she said. “But I think it is the closest thing we have to something that people really do become emotionally invested in protecting.”

The researchers are working on a proposal for a new patch that would be a “compromise between what gamers would most enjoy and what would be most scientifically useful,” Fefferman concluded.