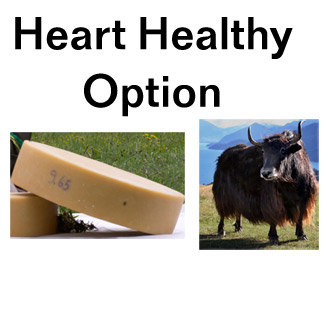 Cheese lovers would be better off eating cheese made from yaks milk rather than cow milk, says a new study that found that yak’s cheese contains higher levels of several healthy fatty acids. Looks like yummy cheddar cheese is out of the question now!

The study was conducted by Brian McBride and his colleagues at Canada’s University of Guelph. They compared the fatty acid composition of yak cheese from Nepal with that of cheddar cheese obtained from Canada.

Yak cheese in particular was found to be rich in alpha-linolenic acid (ALA), which happens to be a type of omega-3 fatty acid also present in flaxseeds.

The yak cheese was also found to be richer in conjugated linoleic acid (CLA) which has been shown to offer a range of health benefits against cancer, fat gain and type 2 diabetes.

Further, the researchers have said that the levels of polyunsaturated fatty acids which are healthy for one’s heart health, were higher in yak cheese.

The study concludesthat, “The results suggest that cheese from yak, grazed on Himalayan alpine pastures, may have a more healthful fatty acid composition compared to cheese manufactured from dairy cattle fed grain-based diets.”