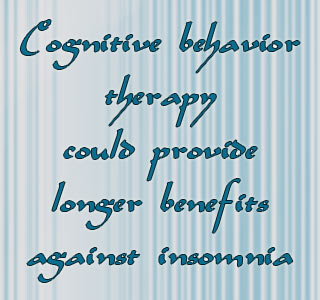 Persistent insomnia patients may possibly find a combined treatment of cognitive behavior therapy and zolpidem drugs beneficial in enhancing their sleep. However for long term benefits a treatment of cognitive behavior therapy (CBT) alone was believed to be more helpful. This revelation was made by Charles M. Morin, PhD, of the Universite Laval, Quebec, Canada and colleagues.

Insomnia may be termed as a commonly affecting health problem which may affect innumerable people in different ways. It could perhaps be treated with CBT along with certain medications which may yield short-term benefits.

This study was conducted with the aim of determining both the short and long term benefits gained from CBT, either alone or in combination with certain drugs. These experts were also said to have compared the various treatments with the aim of yielding a long-term outcome.

An analysis on more than 150 subjects revealed that CBT alone or used together with sleep medications perhaps yielded a good outcome. It seemed to improve the time consumed to fall asleep, time awake post their sleep, as well as their quality of sleep.

It was observed that, “The best long-term outcome was obtained with patients treated with combined therapy initially, followed by CBT alone, as evidenced by higher remission rates at the six-month follow-up compared with patients who continued to take zolpidem during extended therapy (68 percent vs. 42 percent).”

Seemingly sleep time was believed to have increased when combination therapy was employed. However it was also noted that at present there may be no efficient treatment which may be beneficial to all the patients suffering from insomnia. Therefore a deeper analysis needs to be conducted which can probably develop suitable treatments for such people.

This study was reported in JAMA.