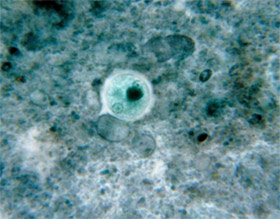 A new study has indicated that resistance to certain infectious diseases could actually be genetic. Paul Schliekelman’s research was inspired by personal experience after catching stomach flu from his daughter three times over a six-month period.

The researchers believe that the genetic resistance could be beneficial to families as those with the gene are both unlikely to suffer from disease and also unlikely to carry the disease home.

The genetic resistance may be beneficial to families as those with the gene are both unlikely to suffer from disease and unlikely to carry the disease home. Paul Schliekelman, author of the study, says the research was inspired by personal experience after catching stomach flus from his daughter three times over a six-month period.

Schliekelman’s research concludes that there is a strong tendency to catch infectious diseases from family members and if a relative has a gene that gives resistance to a disease and it would benefit other relatives because they would be less likely to catch the disease.

Since genes that offer resistance to infectious diseases will tend to cluster in families, the resistance genes in a family help each other out and natural selection in their favour can be dramatically increased.

This model may prove useful in understanding the spread of deadly diseases and may alter the long-term natural selection of certain genes in a population. Studying the genetic behaviour of these diseases could be an important step towards understanding the evolutionary history of infectious disease resistance.