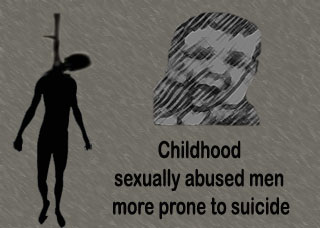 University of Bath researchers say that sexual abuse in childhood significantly increases the risk of suicide in men. The study revealed that, children sexually abused Australian men were more likely to contemplate suicide as compared to women.

Risk factors linked with suicide contemplation include gender and mental health problems; however, childhood abuse is believed to be one of the main risk factors for committing potential suicide.

Personal interviews and a series of surveys were conducted, in Australia, by Dr. Patrick O’Leary and Professor Nick Gould, from the University’s Department of Social & Policy Sciences.

They discovered that many male victims of childhood sexual abuse were apparently 10 times more vulnerable to commit suicide. It’s also stated that these men were not diagnosed as clinically depressed.

Dr. O’Leary says that studies on childhood sexual abuse linkage with suicide are usually conducted on women, rather than men. He further says that childhood sexual abuse can evidently prove to be a very traumatic experience in people; however, for men it’s even more difficult to get over such an experience, because they supposedly don’t share their thoughts and feelings with friends.

He says, “Many suffer feelings of failure and isolation and think that it is a sign of weakness to discuss their past abuse with others. Men also tend to visit their doctors less frequently, so those who are at risk of suicide often slip under the radar of the healthcare system.”

Dr. O’Leary estimates that evidently there are around 2,000 men suicides in U.K. every year. Apparently, men are three and a half times more prone to commit suicide as compared to women. Supposedly, an average of 20 failed attempts is estimated with every suicide.

Dr. O’Leary states that men usually deal with childhood sexual abuse by apparently concealing their negative feelings and experiences by taking comfort in alcohol, substance misuse, and even obsessive behavior, which may even result dealing with the criminal justice system.

He recommends that the awareness of such issues in healthcare as well as the criminal justice system may aid in detecting people suffering from the adverse effects of such childhood experiences. This may, in turn, prove to be beneficial in giving them the required treatment before the victims consider taking drastic steps.

The study was funded by the University of South Australia.

Their findings are published online in the British Journal of Social Work.