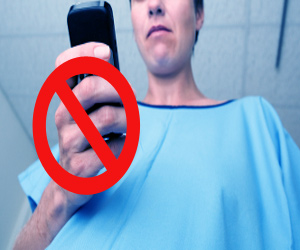 A new Dutch study of mobile phones has found that the electromagnetic fields that they generate could disrupt the functioning of critical care equipment in hospitals.

Researchers at The University of Amsterdam recorded around 50 incidents of electromagnetic interference from cell phone use in hospitals. They classified 75% of them to be hazardous.

The Dutch scientists assessed the impact of mobile phone signals in the proximity of 61 hospital medical devices such as ventilators and electrocardiogram machines in 17 categories. Even pacemakers would get disrupted due to cell phone signals.

During the study, interference was assessed with two General Packet Radio Service signals. This is basically a data transmission technique that transmits and receives data in packets.

Forty-eight incidents occurred in 26 devices, 16 of these were classified as hazardous, while 20 were termed as significant and 12 as light.

Based on these finding, the researchers have said that cell phones should come no closer than one meter to hospital beds and equipment.

“Critical care equipment is vulnerable to electromagnetic interference by new-generation wireless telecommunication technologies with median distances of about 3 centimeters,” the Dutch researchers wrote.

Besides switching off ventilators, disrupting pacemakers and electrocardiogram machines, other malfunctions attributed to electromagnetic interference by the Dutch team include complete stops with no alarms in syringe pumps and incorrect pulsing by an external pacemaker.

Interestingly, this study contradicts one that was conducted sometime earlier this year by Mayo Clinic researchers who found that 300 tests over a five-month period showed no noticeable interference with important hospital equipment due to regular cell phone use.

But this new study conducted by the Dutch scientists most certainly calls for a more intensive study into critical care equipment and its compatibility with new wireless telecommunication technologies that are increasingly being used by hospital patients.