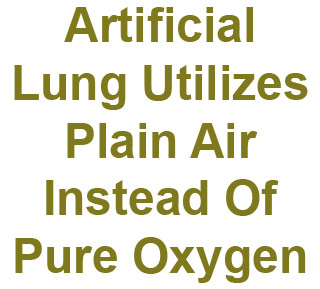 After the sphere of artificial kidneys, scientists are now laying hands on techniques for constructing artificial lungs. Cleveland scientists have created an artificial lung that seems to be as efficient as the real organ and utilizes air and not pure oxygen. The existing man-made lungs need the latter for functioning.

The human utility of the device is still way ahead, but it could be ray of hope for the 200 million lung disease patients across the globe. The device is touted to work as an efficient portable and implantable man-made lung. The scientists constructed the prototype device by utilizing lung design and minute dimensions. The aforesaid lung comprises breathable silicone rubber blood vessels that are apparently a diameter less than one-fourth the diameter of human hair.

“Based on current device performance, we estimate that a unit that could be used in humans would be about 6 inches by 6 inches by 4 inches tall, or about the volume of the human lung. In addition, the device could be driven by the heart and would not require a mechanical pump,” remarked Joe Potkay, a research assistant professor in electrical engineering and computer science at Case Western Reserve University and the lead author.

The present artificial lung mechanisms ought to work with heavy tanks of oxygen, which restricts their portability. Since oxygen exchange is ineffective, they seemingly cannot be used while patients are active. The life period of the system is supposedly calculated in days. The principal aim of the investigators was portability and efficiency. They first crafted a mould with tiny features and sculpted a layer of liquid silicone rubber that thickened into artificial capillaries and alveoli. They then divided the air and blood pathways with a gas diffusion membrane.

The team made the areas of the lung identical to the human lung and also kept a huge surface-area-to-volume ratio and narrowed the distances for gas diffusion, unlike the current form of sculpture. To test their functionality, a trial was conducted with pig blood which showed that the oxygen exchange process seemed to have 3 to 5 folds greater efficacy. This method allowed them to access fresh air in place of pure oxygen as the ventilating gas.

Potkay’s research team is now negotiating with biomedical and chemical engineers to provide a layer of coating that prohibits blockage in the narrow artificial capillaries. They are also speculating on construction procedures for artificial lung that is big enough to be used in tests for mice. Human-scale artificial lungs to be used in clinical systems are possibly a decade away. These patients would sport these devices while their own lungs are treated. They may also implant one as a bridge while anticipating a lung transplant where they have to wait for nearly more than a year.

The research is published in the journal Lab on a Chip.

Obesity may be infectious