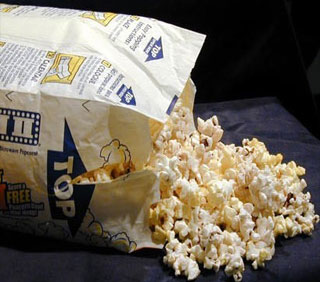 The next time you make yourself a bag of popcorn in the microwave, take care not to inhale any of the fumes let out. A leading lung expert has warned that inhaling fumes while micro waving your pop corn may cause harm.

The food-flavoring fumes contain a butter-flavor chemical called diacetyl used by some of the companies who produce microwave popcorn. This chemical when inhaled appears to cause this harm, the expert said.

A man complained of a worsening cough and increasing shortness of breath. Lung function tests and imaging studies showed he has a lung disorder -bronchiolitis obliterans- obliteration of the tiny airways in the lung.

His only exposure was to the two or more bags of microwave popcorn that he consumed every day. Lung expert Cecile Rose took a team to the man’s house and tested the air while micro waving some popcorn.

Air levels of diacetyl were similar to those in the area of a microwave popcorn factory where workers were affected, Rose and team found.

Bronchiolitis obliterans is a rare disease and was first seen in 1985 in workers in food-flavor factories. In 2002, the disease was seen in workers making microwave popcorn in particular.

There have been many other reports since then, with at least three deaths and many patients awaiting lung transplants.

Many foods other than popcorn contain diacetyl. There is no indication that eating these foods is dangerous.

But breathing fumes containing diacetyl appears to be very dangerous, Rose, an associate professor of pulmonary medicine at the University Of Colorado School Of Medicine said.